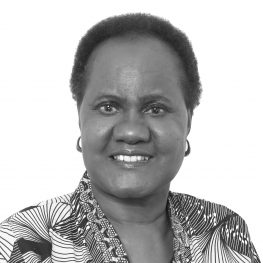 Ambassador and Permanent Representative of Botswana to the UN and other International Organizations in Geneva. Former Attorney General of the Republic of Botswana, first woman in the country to hold that position

In Setswana, we say ‘go ruta mosadi ke go ruta sechaba’ meaning that ‘to educate a woman is to educate a nation’.

– Athaliah Molokomme, Speech at the Embassy of France, The Hague, 10 March 2014 on International Womens Day.

In May 2003, Athaliah Molokomme was appointed judge of the High Court of Botswana, where she adjudicated over civil and criminal matters at both original and appellate level. Her ambition and dedication to human rights and gender equality led her to get appointed to the position of Attorney General of the Republic of Botswana in October 2005. By virtue of this position, she was an ex officio member of the Botswana Cabinet, the Principal Legal Advisor to the Government of Botswana and Head of several high policy level Committees and Councils in the Government. She represented the Republic of Botswana at regional and international levels and was an impressive advocate for African states’ membership to the International Criminal Court. In December 2016, she resigned her position, leaving behind a stronger and fairer judiciary.

Molokomme taught law at the University of Botswana from 1981 until 1996 and has researched and published extensively in the fields of family law, women and law, customary law and employment law. For the past three decades, she has been a regular speaker at national, regional and international conferences, workshops and seminars in her areas of expertise. Molokomme is passionate about justice, which she believes requires leadership and is a universal value that needs to be constantly nurtured. Her vision is to see a world where all people are treated fairly, and able to live a dignified life.

Her research and academic background formed the foundation of her advocacy for women’s rights in Botswana. In her efforts to advance gender equality, Molokomme has served on several boards, commissions and professional organisations at national, regional and international levels. She is a founding member of several organisations, such as Emang Basadi, Women and Law in Southern Africa (WLSA), and Women, Law and Development International (WLDI). Among the awards she has received are the Women’s Human Rights Award from Women, Law and Development International in 1993, and the Presidential Order of Meritorious Service for Exceptional Service to Botswana in 1999.

From July 1998, she was the founding head of the Gender Unit at the Secretariat of the Southern African Development Community, where she was an advisor on gender issues and developed policies and programmes on the empowerment of women and gender mainstreaming.