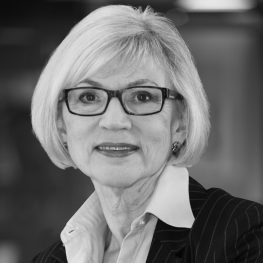 The Right Honourable Beverley McLachlin served as Chief Justice of Canada from 2000 to mid-December 2017.

The Right Honourable Beverley McLachlin served as Chief Justice of Canada from 2000 to late-December 2017. In the summer of 2018, Ms. Mclachlin became a Member Arbitrator at Arbitration Place.

Ms. McLachlin sits on a number of not-for-profit boards and institutions. Her particular focus is improving access to justice for Canadians and people throughout the world. She was co-founder and past President of the National Access Committee and works with many groups concerned to improve access to justice.

Ms. McLachlin also works as an arbitrator and mediator in Canada and internationally. She brings to those forms of dispute resolution her broad and deep experience for over 35 years in deciding a wide range of business law and public law disputes, in both common law and civil law; her ability to work in both English and French; and her experience and skill in leading and consensus-building for many years as the head of a diverse nine-member court.

Ms. McLachlin is the first and only woman to be Chief Justice of Canada and she is Canada’s longest-serving Chief Justice.
The former Chief Justice chaired the Canadian Judicial Council, the Advisory Council of the Order of Canada and the Board of Governors of the National Judicial Institute.
In June 2018 she was appointed to the Order of Canada as a recipient of its highest accolade. Companion of the Order of Canada. She has received over 35 honorary degrees from universities in Canada and abroad, and numerous other honours and awards.
Ms. Mclachlin is an Honorary Bencher of The Hon. Society of Gray’s Inn, The Hon. Society of Lincoln’s Inn and The Middle Temple; Vice-President of The Law Society, University College Dublin; and an honorary Fellow of the American College of Trial Lawyers, the American College of Construction Lawyers, and the International Academy of Construction Lawyers.

Throughout her judicial career, Ms. McLachlin has been involved with countless areas of the Canadian legal system, both common law and civil law, and both private and public law, in English and French. In addition to working in those languages, she has limited fluency in German. Ms. McLachlin is the author of numerous legal articles and publications, as well as a mystery novel, Full Disclosure, published in 2018.

The 2,094 Supreme Court of Canada judgments in which she participated – of which she wrote 442 – and her legal writings and speaking, include a wide range of subjects in corporate, construction, financial services, taxation, contract, tort, other areas of business law, as well as arbitration and mediation. Her legal texts include, as lead co-author, the first and second editions (1987 and 1996) of The Canadian Law of Architecture and Engineering. It is generally recognized that the judgments of the Supreme Court of Canada during her tenure have affirmed Canada as a jurisdiction that is very supportive of arbitration.