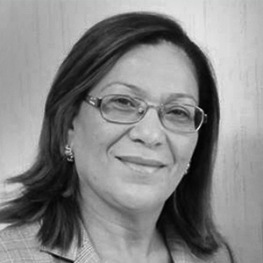 Former judge now lawyer at the Court of Cassation, Tunisia. Former Secretary-General of the Association of Tunisian Judges (AMT)

It is a strong message for all Tunisians and means that a Tunisian woman can compete with men for decision-making positions.

– Kalthoum Kennou, on her candidacy for the Tunisian Presidential Elections, 2014.

Kennou has 25 years of experience in the complicated Tunisian judicial system. For many years, she has been an avid advocate for the independence of the judiciary and the needed reforms. Kalthoum Kennou stood out under Ben Ali through her perseverance and her rebellion in the face of the repressive regime.

In 2014, Kalthoum Kennou made history by running for presidency as the first female candidate ever in Tunisian elections. Being the only independent candidate with an all-volunteer staff, she gathered nearly twice the required number of signatures to earn a spot on the ballot. Eventually, she became 11th out of 27 candidates, leaving behind a number of well-known politicians. With this achievement, Kennou sent out a message to both political activists and Tunisian women to continue their efforts for political change.

Kennou has been a serving judge since 1989. She is an active member of the Tunisian Judges’ Association, and was appointed as its Secretary-General in 2005. Additionally, she served as an investigating Judge at the Tribunal of Kairouan (2005-2010) and the Court of Appeal of Tunis (2001-2005).

Kalthoum Kennou was an active fighter against the dictatorship regime of President Zine el-Abidine Ben Ali. As a consequence of her work, she was subjected to politically motivated, professional and personal harassment, including salary cuts and arbitrary transfers. In 2005, after being based in Tunis for most of her life, she was suddenly transferred to a remote province of Kairouan. Again she was transferred in 2009, this time to the remote city of Tozeur. Nevertheless, she kept helping her activist friends and participating in protests and strikes. When the revolution came, Kalthoum signed a statement on the 11 January in 2011 against the authorities.

Her fight for the independence of justice became recognised globally and in 2010, she became the commissioner for the International Commission of Jurists.