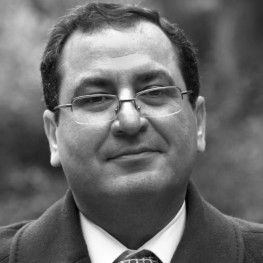 Former Minister of Justice and Chairman of the Board for the Justice Center for Legal Aid, Jordan; Founder and Senior Partner of International Business Legal Associates (IBLAW)

A promise of peace requires awareness of it.

Salaheddin Al-Bashir has had a distinguished career in both the public and private sectors. A lawyer by training, he has worked on several public sector reform projects ranging from trade liberalisation, investment policy, ICT strategy, public sector reform, and judicial reform. Before returning to private practice, Al-Bashir was the Minister of Industry and Trade, Minister of Justice, Minister of State for Prime Ministry Affairs, Minister of Government Performance and Minister of Foreign Affairs; he was also a Senator in the upper House of Parliament.

During his government service, Dr. Al-Bashir chaired the Government’s Economic, Legal, and Public Sector Reform Committees. He defended and passed more than 300 legislative reform acts and designed and led Jordan’s largest judicial reform programme, the Judicial Upgrading Strategy (JUST). JUST focused on improving the overall performance of the judiciary and enhancing its role in supporting Jordan’s civil society and economic competitiveness. Components of the strategy also included safeguarding the independence and integrity of the country’s judiciary. Around 600 projects emanated from the strategy and JUST instilled operational efficiency enhancement measures, which resulted in a more efficient justice system.

Al-Bashir is the Founder and Senior Partner of IBLAW – one of Jordan’s leading law firms.  Although he is primarily involved in arbitration and infrastructure finance and implementation projects, he has also done substantial policy work as a lawyer.  He drafted key trade, economic and public sector reform laws in Jordan and the region. He was the primary legal advisor for Jordan’s World Trade Organisation accession, as well as for the signing of the Free Trade Agreement between Jordan and the United States. He also advised on key reforms such as the telecommunications and e-government reform, and the establishment and regulation of the Aqaba Special Economic Zone (ASEZ).

Al-Bashir is also the Chairman of the Board of the Justice Center for Legal Aid, ADEL, in Amman, Jordan. ADEL is a Jordanian NGO that works to institutionalise legal aid in Jordan and provides free legal services and representation to every person in need in Jordan. It is nationality, sex, gender, and age blind. It has 24 legal clinics spread throughout the country and is by far one of the most successful examples of legal aid in the region.

Salaheddin Al-Bashir is the founder of Al-Qistas for Information Technology. It is a Jordanian based software solutions Company founded in 2010 with a vision to be the market leader in computer assisted legal encyclopedia systems across the Middle East. Its goal is to enable legal research that is highly intelligent yet simply accessible so that any user can obtain accurate legal information through optimal methodologies and innovative technology. The company provides a legal search engine for the Jordanian legal system which includes an all-encompassing database of primary and secondary sources of Jordanian law through Al-Qistas’ website.

Dr. Salaheddin Al-Bashir on the biggest challenge for leadership in the justice sector: