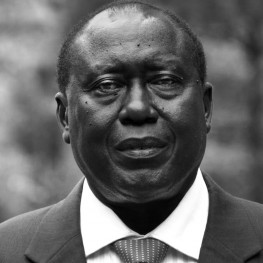 Former Minister of Justice, Attorney General and President of the High Court in Rwanda

Rwanda believes in an international justice system, based on equality of states, equality of all the people before the law; a system based on recognisable universal shared values.

– Tharcisse Karugarama as Minister of Justice, Statement at the United Nations General Assembly on 3 April, 2013.

In the late 1970s and 1980s, Tharcisse Karugarama was a teacher at Kitante Hill School in Uganda, where he grew up as a Rwandan refugee. In the 1990s, he became actively involved in the right to return home. Karugarama was appointed Minister of Justice and Attorney General of the Republic of Rwanda in 2006. He served in that capacity until 2013.

Karugarama is one of the founding members of the Rwandese Patriotic Front (RPF), the current ruling party in Rwanda. He invaluably contributed to the introduction of constitutional guarantees on the independence of the judiciary and prosecution. For the first time, the courts and the prosecutions services received their own budgets, independent from the Ministry of Justice. They also gained the ability to appoint judges and prosecutors, through the High Council of the Judiciary and High Council of the Prosecution Services. Apart from his role in Rwanda’s constitutional reform, Karugarama was also involved in the Penal Code reforms that reduced custodial penalties. This was made possible with the introduction of community work as an alternative punishment to imprisonment, which helped reduce prison congestion.

Before being appointed Minister of Justice and Attorney General, Karugarama served in different capacities in Rwanda’s Justice sector over a period of 13 years. This included being a Prosecutor General at the Appeals Court, President of the High Court and Chairman of the National Law reform Commission. He also served as the Country’s Deputy Chief Justice in charge of Courts Administration. In those different capacities, he was instrumental in transforming Rwanda’s justice system post-genocide and oversaw most of the reforms that still characterise Rwanda’s judicial apparatus today. He helped increase the efficiency of rendering justice in the country and made it possible for the Rwandan judicial institutions to gain independence.

Under his tenure, the justice system was able to judge nearly 2 million genocide dossiers that involved more than 1,2 million genocide suspects, thereby enabling the unity and reconciliation process to take place. Innovations and home-made solutions in conflict resolution are part of Karugarama’s legacy and have become the centerpiece of Rwanda’s judicial system. He advanced minority rights and introduced  “Mediation Committees”, elected by the population, to deal with both civil and minor crimes. These mediation committees settle more than 70% of civil and criminal matters so that only few cases go to Courts. This means professional judges and prosecutors deal only with major cases. Karugarama also played a major role in the campaign and eventual legislation abolishing the death penalty, thereby enhancing the rule of law.

Tharcisse Karugarama is bilingual (English and French) and studied and practiced in both civil law and common law systems. This helped him create a mixed legal system for Rwanda that embodied the best of both worlds. He also incorporated Rwandan traditional values within the legal system that addressed Rwanda’s particular needs.

Apart from working in the justice sector, Karugarama worked for four years with the Office of the United Nations High Commission For Refugees (UNHCR) and seven years as a District Project Officer on a UNICEF/Government of Uganda joint project called The South West Uganda Integrated Project (SWIP). He also worked as a Project Coordinator for the Lutheran World Federation (LWF). Using the experiences he gained in the legal field and in the UN and Civil Society engagements, he was able to build a legal system in Rwanda that embraced the practice of the rule of law, which kept the protection of human rights at the core of all its legislative interventions.