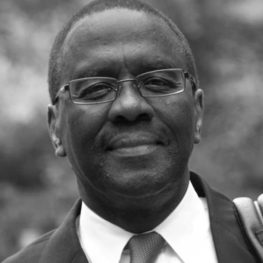 To quote the Chinese philosopher Lao-Tzu: ‘A journey of a thousand miles begins with the first step’. I can’t even say that we have achieved the first step, but the constitution itself is a great leap forward.

Committed and dedicated to changing the judicial system for the better, Mutunga was Kenya’s Chief Justice from 2011-2016. Mutunga’s legacy is characterized by his dedication to democratic values and human rights. For this reason, he was also appointed Secretary General of the Commonwealth Special Envoy to the Maldives in 2016. As Special Envoy, he tried to bring the political leadership there together, and to aid in the process of constitutional and political transition. His overriding mandate was to ‘support a sustainable political dialogue process leading to a stronger climate of pluralism and inclusive elections in 2018, and to encourage the strengthening of democratic institutions and culture in Maldives’. Mutunga is also a distinguished scholar-in-residence at the Leitner Center for International Law and Justice (Fordham Law School, New York City).

Willy Mutunga played a pivotal role in the constitution-making processes in Kenya in the early 90s. He worked on the implementation of the progressive 2010 Kenyan Constitution, which he helped draft, as head of the Judiciary and President of the apex court in the country. He urged for the development of indigenous progressive jurisprudence that is not insular and does not pay unthinking deference to other jurisdictions, regardless of how prominent they may be.

Under his tenure as Chief Justice from 2011 to 2016, Mutunga sought to lay permanent and indestructible foundations for the transformed judiciary. Under the blueprint of the Kenyan Judiciary Transformation Framework 2012 – 2016, he achieved impressive progress in bringing the justice system closer to ordinary people. Not only did he succeed in humanizing the Kenyan judicial systems, he also reduced the number of case backlogs significantly. He aimed to use technology as an enabler of justice, as well as to bring about equitable and transparent systems of recruitment, promotions and training. He supported and strengthened the Judicial Training Institute as a nucleus for juristic training and an institution of higher learning. Mutunga is well-known for his fight against corruption in the judiciary and in Kenya as a whole. He spearheaded independent and principled dialogue, consultation and collaboration between the three arms of government.

Mutunga announced in 2015 that he would retire early from his office to give the country sufficient time to recruit a new Chief Justice. This was to avoid the crisis that might arise if the August 2017 General Election was held without a substantive holder of the Office of Chief Justice. Mutunga’s early retirement is a testament to his strong leadership qualities and ability to think ahead.

Before his time in office, Mutunga acted as the Secretary-General of the University Staff Union at the University of Nairobi for three years. His work in the pro-democracy movements, notably with the pro-democracy Twelfth of December Movement in Kenya, made him a target of Moi’s Kenyan African National Union (KANU) party and he was detained without trial, from 1982 to 1983. He was also dismissed from the University of Nairobi. However, detention did not silence him. He continued to denounce undemocratic governance and to protest against human rights violations in his country. On an international level, Mutunga worked at the board of Rights and Democracy in Montreal, Canada, participated in the World Social Forum and consistently interrogated liberation paradigms in the age of neoliberalism.